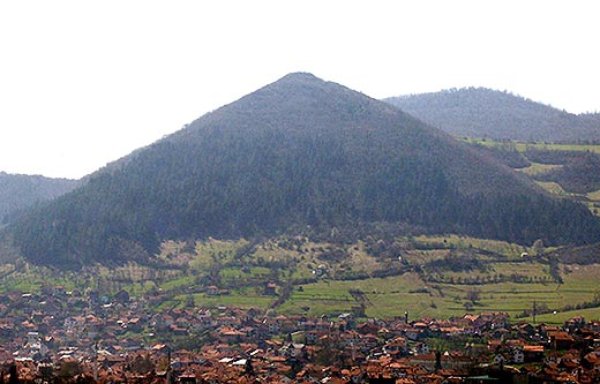 Pyramid of the Sun, Bosnia 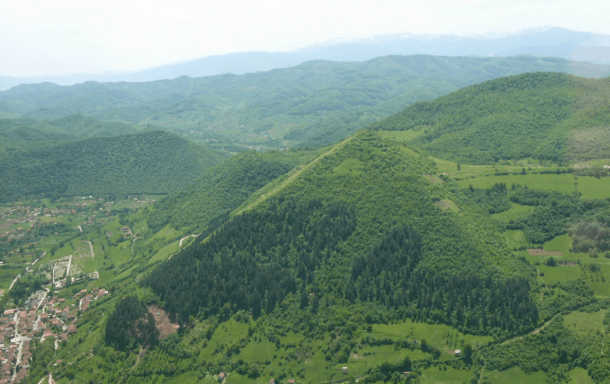 Pyramid of the sun, Bosnia

Anthropologist Dr.sci. Semir Osmanagic established a hypothesis about the pyramids and underground tunnels’ existence in April 2005 and started an investigation and these are his claims:

The Bosnian Valley of the Pyramids represents the biggest complex of pyramidal structures in the World and is located near Visoko. It consists of the

Pyramids of the Sun, Moon and Dragon form a perfect equilateral triangle with 2.170 meters distance between their tops. All pyramids are oriented toward the cosmic North. Fifty-five leading scientists from 13 countries concluded, during the First International Scientific Conference on the Bosnian Valley of the Pyramids in August 2008, that the Bosnian pyramids were an archaeological phenomenon and further scientific investigation was needed.

Proposed design of the Bosnian Pyramids

Geo-radar and thermal analysis confirmed the existence of passageways and chambers inside the pyramids. Sample analysis of rectangular blocks from the Bosnian pyramid of the Sun at the Institute for Materials in Bosnia, Italy and France have confirmed that they were man-made as concrete blocks of exceptional quality. According to the radiocarbon dating [Poland, 2011] and pedological analysis (the study of soils in their natural environment) [Bosnia, 2006] the pyramids were built over 10,000 years ago. The underground labyrinth is tens of kilometers long and consists of passageways, chambers and artificial lakes.

The Bosnian Pyramid of the Sun has a regular pyramid geometry with three preserved sides: north, east and west. {70seven: Don’t pyramids have 4 sides?}  It is coated by rectangular blocks. The blocks are made from the best quality concrete material superior to modern concrete. Founder of the French Institute for Geopolymers, Prof Joseph Davidovits {70seven: Prof Davidovits denies this claim} has analyzed a sample from the Bosnian pyramids under an electronic microscope and discovered artificial binding material called “Ancient Geopolymer Cement”.

The shadow of the Bosnian Pyramid of the Sun covers the Bosnian Pyramid of the Moon during the summer months just before sunset, showing a clear astronomical relationship between two pyramids. This pyramid is covered by soil and vegetation, like hundreds of pyramids in China, Mexico and Guatemala. According to the Federal Institute of Pedology layers of soil that cover the pyramid is between 12,000 and 18,000 years old, and radiocarbon analysis of the organic material discovered below the layers of soil and above the concrete blocks, performed at the Institute in Kiev, Ukraine has shown an age of 24,000 years +/- 200 years. These scientific results make this pyramid the oldest on the planet.

But…not everyone is convinced of this…

“I understand that the archaeologists would be the last ones to accept the fact that thousands of years back we did have advanced civilization in this region,” Semir Osmanagic said.

“Extraordinary claims require extraordinary evidence,” said Curtis Runnels, an archaeologist at Boston University in Massachusetts and a Balkan prehistory expert. He says the known Upper Paleolithic peoples in the region were lucky if they could build tents and fires. {70seven: we all know that mankind was really not stupid at any point in time} Monumental architecture on a scale not even seen in Egypt would be a cosmic leap forward. “It is not up to professional archaeologists to explain 200 years of research and evidence,” Runnels said. “It is up to Mr. Osmanagic to prove his claims.”

During that time [12,000 years ago] much of Europe was under a mile-thick sheet of ice and most of humanity had yet to invent agriculture.

Foreigners by the thousands have come to see what all the fuss is about, drawn by reports by the BBC, Associated Press, Agence France-Presse and ABC’s Nightline (which reported that thermal imaging had “apparently” revealed the presence of man-made, concrete blocks beneath the valley).

“It’s like a religion based on corrupted New Age ideology.”

“What he’s found isn’t even unusual or spectacular from the geological point of view,” says geologist Robert Schoch of Boston University {70seven: he is the guy that claims the Sphinx is much older than Egyptology say}, who spent ten days at Visoko that summer. “It’s completely straightforward and mundane.”

Osmanagich said Visocica’s conglomerate blocks were made of concrete that ancient builders had poured on-site. This theory was endorsed by Joseph Davidovits, {70seven: remember Davidovits denies this} a French materials scientist who, in 1982, advanced another controversial hypothesis—that the blocks making up the Egyptian pyramids were not carved, as nearly all experts believe, but cast in limestone concrete.

in 2007, Enver Buza, a surveyor from Sarajevo’s Geodetic Institute, published a paper stating that the Pyramid of the Sun is “oriented to the north with a perfect precision.”

Ruins of the 14th-century Visoki Castle can be found on the summit of Visocica Hill—on top of the Pyramid of the Sun—and, in combination, the two icons create considerable symbolic resonance for Bosniaks. {70seven: we also know that people built on top of existing sites, like Gobekli Tepe in Turkey and Stonehenge in England and the church on top of the great pyramid of Cholula in Mexico}

“Ten years from now nobody will remember my critics,” Semir Osmanagich says.

Remember Joseph Davidovits, Founder of the French Institute for Geopolymers, who denied having analysed concrete from the site? The following is from his own website:

What about the geo-radar and thermal images? Not a word on this from the critics…nor the claimant…as far as I can tell thus far.